The densest places in Singapore [cont'd]

Let's refine the map of population density in Singapore by dividing each town (planning area) into subzones, as defined by URA. This would give us the following map: 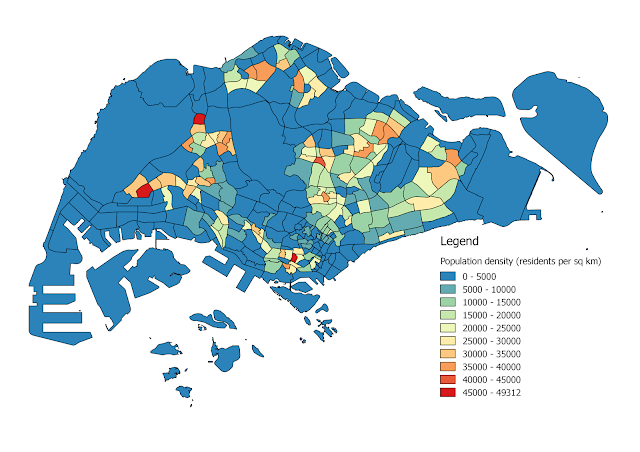 As you can see, there are subzones in Singapore with more than 45,000 residents per sq km!

The densest subzone in Singapore is Jurong West Central, with more than 49,000 residents per sq km. The satellite image below gives you an idea how densely built up the subzone is. No wonder Jurong Point is always so crowded!

The runner-up is Yew Tee (part of Choa Chu Kang), with more than 48,000 residents per sq km, followed closely by Tiong Bahru Station.

Curious about your own neighbourhood? Here are the regional maps of population density:

It appears to me that the population is more evenly distributed in the eastern and northeastern regions of Singapore, whereas the land constraints in the western region have resulted in higher concentrations of people.

The densely populated west is putting a lot of pressure on the transport corridors to the east, with the Jurong East node becoming a bottleneck. Will the development of Jurong Lake District as a Regional Centre relieve some of that pressure or make it worse? What do you think?

Data sources: Ministry of Trade and Industry - Department of Statistics and Urban Redevelopment Authority via data.gov.sg. Retrieved 3 Jun 2015.
Any analysis or transformation of the data is mine own and shall not be attributed to the Singapore Government or its Statutory Boards.
Posted by Peter Heng at 22:58